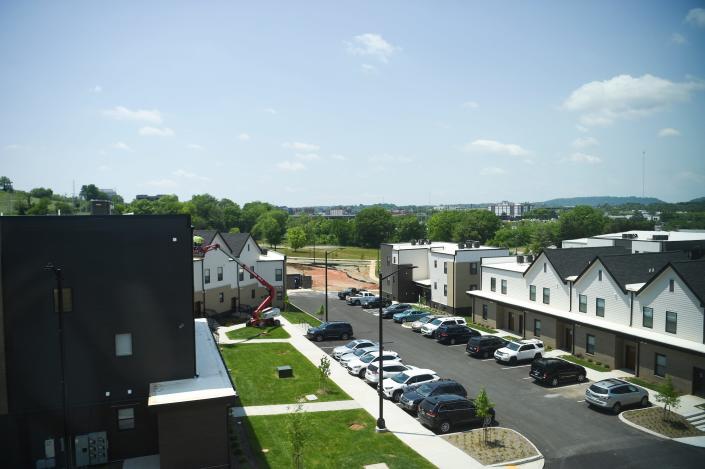 Everyone deserves a roof over their head. Beyond that, the possibilities are practically endless.

Knoxville has welcomed a large number of residential and hotel projects in the past year that redefine the word “accommodations,” from condos with stadium and river views to hotels designed for entertaining guests and attracting locals.

Whether you are looking for a one-night stay or a place to call home, your room is ready. Knox News is here to help you find it.

With Knoxville in the shadows of the Great Smoky Mountains, we appreciate the great outdoors. Connect with the local version of Middle-earth by visiting Ancient Lore Village, a fantasy resort for humans and leprechauns alike.

But if you find yourself southeast of the Scruffy City, remember no trip to Gatlinburg and Pigeon Forge is complete without a stop at Dollywood. The amusement park will be welcoming a new “woodsy” resort in Fall 2023 — but perhaps, not as woodsy as the Sanctuary Treehouse Resort, scheduled to open this summer.

The 407: What’s next for the project after securing new Smokies attraction?

Dollywood: Opening delayed, but Dolly looks ahead toward new resort

Coming soon: If you’d rather skip starwatching in the Smokies for sightseeing in the city, you won’t want to miss the music-themed Hotel Americana, a jazzed-up vision for the AJ Building in downtown Knoxville.

Local leaders have approved plans for an Old City stadium for baseball and soccer, which is expected to include at least $142 million in private money dedicated to surrounding development.

The first condos announced for the stadium will include home plate views in the forthcoming Beauford Delaney Building, named after the Black modernist painter and Knoxville native.

Apartments on the Tennessee River

Knoxvillians are thirsty to see more development along downtown Knoxville’s waterfront, but population density is key. While developing along the Tennessee River comes with some unique challenges, Dominion Group is planning to make a major splash with South Banks at Suttree Landing.

The $60 million development will add 230 apartments along the waterfront, while Tailwater Properties plans to spend $7 million to construct 20 townhomes nearby at a development dubbed Station South.

Knoxville’s Community Development Corporation is in the process of building a modern affordable housing neighborhood at the former Austin Homes site. The $90 million First Creek at Austin redevelopment is expected to include more-than-triple the units, and the first phase is already complete.

Also underway is an overhaul of Dogan-Gaither Motor Court, long ago a safe haven for Black travelers. Josh Smith and his Fourth Purpose Foundation are investing more than $3.3 million to transform the site into Dogan-Gaither Flats, a future home for formerly incarcerated men.

Many old buildings were designed to last, making them great candidates for modern housing. Architect Buzz Goss believes his plans to turn the Pollard Building at Broadway Baptist Church into 53 apartments could be transformational for neighborhoods north of the city’s core.

North Knoxville: What will Broadway-Central look like in three years?

Also north of downtown is Emory Place, which Orel Brodt is reimaging as an arts-focused district, with apartments, galleries and commercial space.

On the western edge of the city’s center, an area “The Scruffy Stuff” podcast dubbed West Downtown Knoxville, is the former Tennessee State Supreme Court building that’s being transformed into Church + Henley, a 230-unit apartment development expected to open in “late 2022.”

But if you want to live in the heart of the Old City nightlife scene, why not consider moving to a former nightclub? The former Bowery and NV Nightclub buildings are set to become a mixed-use development just steps away from the new Smokies stadium.

Just north of the stadium site is Standard Knitting Mill which, despite catching fire in January, could still become a multiuse development with rooftop farming, a marketplace and loft-style apartments.

Church + Henley is just one half of the development planned for the former Tennessee State Supreme Court building.

Developer Rick Dover also is planning The Tribute, slated to open Aug. 1 with 63 units and a rooftop bar. The development would include both short- and long-term rentals, as well as a 1,950-square-foot penthouse.

The Scruffy Stuff: What does each downtown-area neighborhood need most?

The empty 200 block of Gay Street has long been considered one of downtown’s most notorious gaps. But Hatcher-Hill Properties has big plans to bring a mix of commercial and residential units across two buildings on the property, which would create a corridor of storefronts in a pedestrian plaza similar to Market Square. Look for it at the intersection with Summit Hill Drive.

The Scruffy Stuff: Can redeveloping the 200 block create a new downtown district?

One block north is 304 S. Gay St., which already is home to Knoxville’s priciest Airbnb and the city’s tiniest speakeasy. The property, along with the empty lot next door, recently was sold to Ephant Group for $7.3 million. While no plans have been announced for the lot, Ephant specializes in hotel developments.

Similar to the empty lot at 308 S. Gay St. is “the notch” just a few steps away, where developer Shailesh Patel wants to bring a mixed-use development with an upscale hotel between Chivo Taqueria and Mast General Store.

A $22 million SpringHill Suites by Marriott was proposed for an empty lot in the Old City if the stadium was approved. With developers continuing to clear hurdles to bring minor league baseball downtown, it looks like fans could have a place to stay after games, concerts and other stadium events.

Living above a restaurant sounds dangerous for anyone prone to the munchies, but Jim Klonaris believes his mixed-use plan for the Willow Creek Gallery space can help elevate the Old City. Jim’s on Jackson steakhouse would be on the ground level, with short-term rentals and up to six stories of luxury condos on top.

On the 100 block of Gay Street, Vijay Bansode is planning a convenience store and a fast-casual downtown version of his Aroma Indian Kitchen. Short-term rentals are the cherry on top.

Urban living: What would it take for downtown Knoxville to get a grocery store?

This concept isn’t new for the area. Curious Dog, an Old City staple for hot dogs, is located on the ground level of the JFG Flats building. Will Sims and Thomas Boyd recently purchased the property, with plans to keep the residential units as apartments.

If you’re looking for something out of the box, check out the co-living opportunities at Flagship Kerns next door to the proposed South Knoxville food hall. Just south of downtown, this new apartment development includes shared amenities with private suites. Don’t worry — there are no shared bathrooms.

In Loudon, Dover Signature Properties has proposed building an entire neighborhood from the ground up, with 210 multifamily units on the riverfront, 60 single-family units, pocket parks, greenways, a coffee shop, retail and walking trails. Dubbed Lakeshore Loudon, this $40 million idea would be built across a 15-acre property.

Yes, the Hotel Knoxville building at 501 E. Hill Ave. deserves its own section. Not only is it one of the most notorious structures, earning it a spot on our list of ugliest downtown buildings, but no one can seem to decide on a viable plan for the giant vacant pyramid.

Last we heard, senior living was the plan, but that has since been scrapped. Melrose Knoxville LLC, owned by billionaire Neil Kadisha, purchased the property for $16.8 million in October 2020. While no new plans have been announced, something is bound to happen on the property. Check back at knoxnews.com as we follow the story.

It’s 2022, and hotels aren’t just for travelers anymore. The people behind the downtown Marriott and Tennessean hotels have opened the Maker Exchange, a shared amenity between the two properties that includes a restaurant, bar, coffee shop, game room and maker space designed with locals in mind.

On Gay Street, the Ephant Group is transforming the Hope Brothers Building into Hotel Cleo, a boutique hotel concept that would maintain the building’s historic feel. The people behind the building’s former occupant, Sapphire, are planning a public bar and restaurant concept for the property.

Leigh Burch III helped kicked off a downtown living trend when he developed Sterchi Lofts, which began leasing in 2002. The lofts transitioned to condos a few years back.

His latest development, Stockyard Lofts in the Old City, finally has units available following some delays. Now, his focus is likely shifting to Capitol Lofts, a $30 million project with built-in parking, workforce units and what Burch is advertising as the city’s “top pool.”