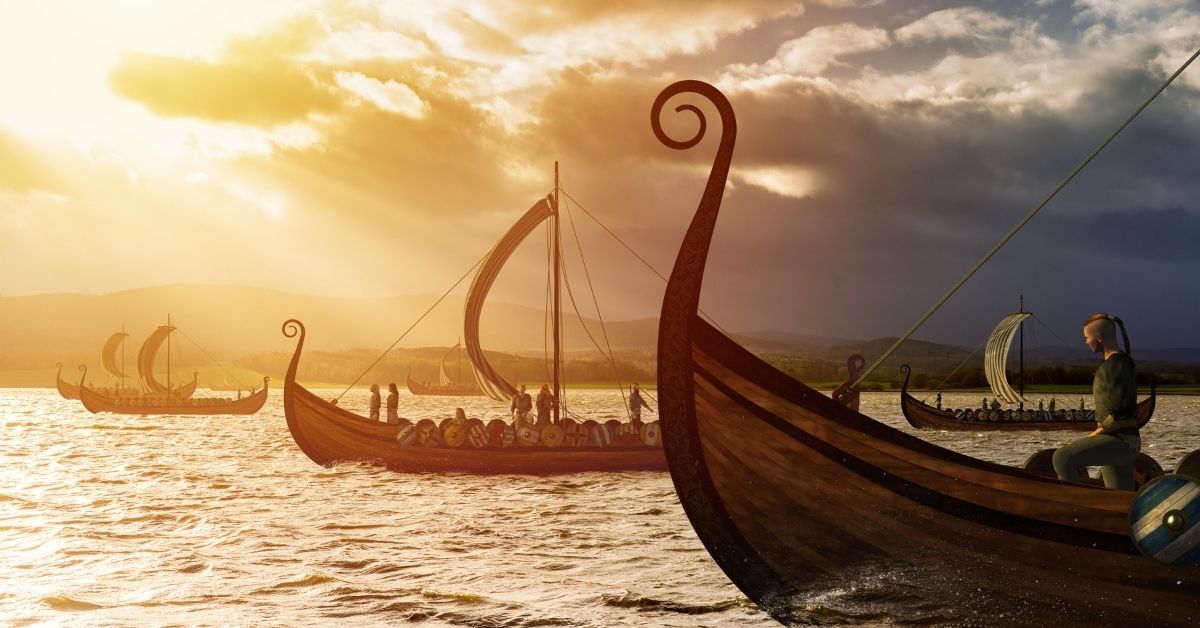 Along with the Spartans of ancient Greece, the Samurai warrior caste of Japan, and the Zulus of southern Africa, the Vikings of Scandinavia are widely regarded as one of history’s greatest warrior cultures.

The Viking era has been a staple fodder of popular culture for decades, from films (How to Train Your Dragon, Outlander, Valhalla Rising) and TV shows (The Last Kingdom, Vikings) to comics (Hägar The Horrible) and novels (Michael Crichton’s Eaters of the Dead, Terry Jones’ The Saga of Erik the Viking).

Now, with Vikings: Valhalla on Netflix, executive producer/writer Jeb Stuart will delve deeper into some of the most famous Vikings in history, including legendary explorer Leif Erikson (played by Sam Corlett) and ambitious Nordic prince Harald Sigurdsson (played by Leo Suter).

But despite the popularity of the Norsemen (or perhaps as a direct result of it), the mythology surrounding these ancient explorers often overwhelms the reality of their existence. While all Vikings were Norsemen, not all Norsemen were Vikings.

In fact, historian Patrick Goodness suggests that the word Viking was originally used as a verb that meant to go out plundering. Only over time did the meaning of the word Viking evolve into a name for an entire community of people.

Here we’ll take a look at the Vikings’ westward expansion from Scandinavia to North America, including the explorations of Leif Ericsson and his legendary father, Erik the Red.

THE VIKING HISTORY BEHIND VIKINGS: VALHALLA

Ruling over most of Scandinavia, the Norsemen were notoriously talented ship-builders. The Vikings’ earliest explorations took them along the coast of northern Europe.

The Swedish went east to Kiev, where they founded Kievan Rus’ (which modern people of Belarus, Russia, and Ukraine claim as their cultural ancestors).

The Norwegian Vikings were especially adventurous, building their imposing longships in port towns such as Bergen and Stavanger and then sailing the fjords of Norway in search of greener pastures to plow and plunder.

They went around the northern coast of England to the islands of Scotland, where they formed alliances with the Highland clans. But others went even further in their quest for new lands.

There is some archaeological evidence that suggests that monks from Ireland may have gone to Iceland decades before the Norse settlers arrived.

Hiberno-Scottish crosses carved into the wall of southern Iceland’s Kverkarhellir cave sometime around 800 AD suggest that there may have been a small settlement of Gaelic monks there, and a cabin found in Hafnir was abandoned sometime between 770 and 880s.

But it was the Vikings who established the first major permanent settlement in Iceland. They arrived sometime around the year 870, long after the rest of Western Europe had already been settled.

Little is known about the circumstances that drew these explorers to cross the frigid waters of the North Atlantic Ocean.

Some historians have surmised that they may have been fleeing conflict brought about by the efforts of Harald Fairhair (a.k.a. King Harald I) to conquer and ultimately unite the small kingdoms that would become Norway.

Others believe it was simply a search for arable land they wouldn’t have to fight (and potentially die) for.

Iceland’s first known permanent settler is believed to be a Norwegian named Ingólfur Arnarson. On his first visit with his foster brother, he stayed over winter in what is now known as Álftafjörður.

When he returned several years later, Arnarson built his homestead in the Reykjavik area and claimed much of the surrounding land for himself.

There were initially between 311 and 436 settlers that followed in his wake, but within 60 years all of the arable land in Iceland had been claimed.

The Landnámabók– the medieval tome that describes the settlement of Iceland by the Norsemen– mentions 1,500 different places and more than 3,500 people.

But some historians estimate that those numbers grew to over 20,000 before the Age of Settlement was over.

Their chieftains established a system of governance (known as the Althing) in 930 at Þingvellir, less than 30 miles east of what later became Reykjavik.

It is now the oldest parliament in the world, though it was relocated to the country’s capital in 1844.

It’s difficult to imagine what those early settlers must have thought when they laid eyes upon Iceland’s dynamic landscapes for the first time.

From the mountains of what is now Thingvellir National Park (a protected UNESCO World Heritage Site) and the dramatic waterfalls of the Golden Circle to the geothermal activity of the Geysir Center, the country’s natural wonders are just as over-the-top and otherworldly as those found in Norway.

The picturesque island of Vigur, which is located in Westfjords and measures just 1.2 miles long and .24 miles wide, offers a taste of what unspoiled Iceland must have looked like 1150 years ago.

The tiny settlement there is home to the country’s only windmill as well as a Victorian-era house (both property of the National Museum of Iceland).

But most of the island is completely undeveloped, serving as the summer home to thousands of birds, including arctic terns, black guillemots, eiders, and puffins.

The ancient Icelandic sagas suggest that there were other Vikings who tried (and ultimately failed) to settle Greenland nearly a century before the arrival of Erik Thorvaldsson.

But Erik the Red (the father of Vikings: Valhalla‘s Leif Erikson) – nicknamed for the fiery hair and beard that matched his notorious temper– was the country’s first permanent European settler, and ultimately led its colonization efforts.

Erik’s family moved to northwest Iceland sometime around the year 960, when they were exiled from Norway because his father, Thorvald Asvaldsson, had killed several people.

By 982 Erik had gotten married and settled on a farm in the Dalasýsla region of western Iceland. Soon after the birth of his first son, Erik committed murder during a property dispute.

As a result, he was exiled from Iceland for three years, so he sailed west in search of new lands.

According to the Saga of Erik the Red, he sailed around what is now known as Cape Farewell and up the western coast of Greenland.

The era from 900 to 1300 AD is known as the Medieval Warm Period. Historians believe the country may actually have been green at the time, with less sea ice, more forests and vegetation, and a longer growing season.

In the majestic fjords and fertile valleys, Erik the Red saw the promise of prosperity. So he eventually returned home to tell friends and families stories of the “Green Land.”

The Icelandic Vikings, who were enduring a famine at the time, were easily sold on relocating. So in 985 Erik led a fleet of 25 ships loaded with 500 people, domesticated animals, and other items needed to establish Greenland’s first permanent settlement.

Unfortunately, 11 of those ships failed to complete the journey, but the survivors established homesteads at what is now known as Qassiarsuk (where Erik served as chieftain) and Nuuk.

READ MORE: The Adventures of Erik the Red & Leif Erikson, the Most Famous Vikings in History

In addition to farming, they would find summer sustenance by hunting for seals and walrus in Disko Bay (which is located above the Arctic Circle). Within 15 years, there were around 3,000 Norsemen living on 300 to 400 different farms.

The Viking civilization disappeared from Greenland about 500 years later: As temperatures in the region got colder, the land was no longer arable.

Some went back to Norway (where many farmsteads had been abandoned after the country was struck by a plague), while others headed even further west.

But you can still see remnants of this ancient Scandinavian society along the Napassorssuaq Fjord, which is uninhabited now but boasts plenty of cool & weird ocean animals and polar bears.

You can marvel at the breathtaking vistas along the Prins Christian Sund, or visit the Halsey Church, which remains the best-preserved Viking ruin in the country.

If you get a chance, head to the Viking museum in Narsaq. There you’ll find a complete longhouse that is believed to be from Erik the Red’s original Greenland settlement.

Erik the Red isn’t the only famous Viking explorer in his family. Erik’s second son, Leif Erikson, returned to Greenland after spending time in Norway, where King Olaf I converted him to Christianity.

Erikson brought several Christian missionaries along with him, and together they built Tjodhilde’s Church (named after Leif’s mother), the first Christian church on the North American continent.

Travelers to Greenland today can visit a reconstruction of the tiny church in Qassiarsuk.

According to the Saga of Erik the Red, Leif spotted a place he called “Vinland” for the first time after his ship got blown off course when he and his crew were en route from Norway to Greenland in 1000 AD.

Other translations of the Icelandic sagas suggest he had learned about it from a merchant, who had seen the new country, but never actually landed there.

Regardless, Leif later assembled a crew of 35 men and set sail, ultimately becoming the first European to set foot on the North American continent.

During his exploration of what we now call Maritime Canada, he first landed on a rocky, desolate place he called “Helluland,” which is believed to be Baffin Island.

Going further, he found a heavily forested area he called “Markland,” possibly in what is now Labrador. His third and final stop, Vinland, as the verdant land offered plentiful grape vines, wheat, and salmon.

It was here, in modern-day Newfoundland, that Erikson founded the first European settlement in North America, nearly 500 years before Christopher Columbus “discovered” the continent.

The site, known as Leifsbudir (Leif’s Booths), remained undiscovered until the early 1960s, when it was identified as a Norse settlement by Norwegian explorer Helge Ingstad and his wife, archaeologist Anne Stine Ingstad.

Visitors to the UNESCO World Heritage Site today can explore reconstructed sod houses and boats from the Viking era.

The rest of Maritime Canada offers a bounty of natural beauty, including the arctic animal-filled Gros Morne National Park, abundant sea life in the Mingan Archipelago, and stunning scenery along the St. Lawrence River and the Fjord du Saguenay.  –by Bret Love