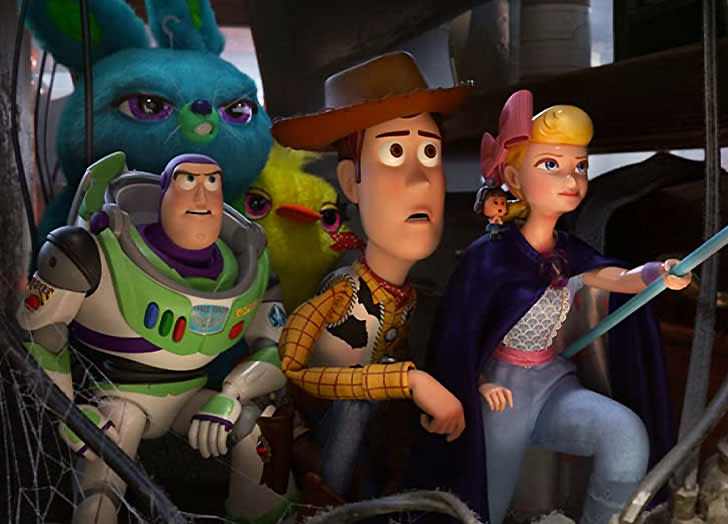 Movie sequels don’t exactly have the best reputation. Oftentimes, they can feel like lazy attempts to capitalize on the success of popular films—which definitely explains why so many follow-up movies lack creativity (see: The Hangover 2 and Mean Girls 2). However, we’ve been fortunate enough to enjoy some great sequels that not only exceeded our expectations, but also totally surpassed the overall quality of the original films. From National Lampoon’s Christmas Vacation to Toy Story 4, here are 15 sequels better than the original films.

RELATED: 12 Iconic Movies that Shouldn’t Be Remade (Like, Ever)

After waiting 14 years to see this sequel, writer and director Brad Bird gifted us all with a brilliant follow-up that was well worth the wait. The storytelling is top-notch, it touches on relevant themes and there’s no shortage of action sequences. But what makes part two even more special is that it includes a closer look at the superhero family’s dynamic, making the story feel a bit more intimate. It highlights the resilience of Elastigirl/Helen Parr (Holly Hunter) as she balances crime fighting with motherhood, and as an added bonus, we see a brand-new side of Mr. Incredible/Bob Parr (Craig T. Nelson) as he transforms into the ultimate stay-at-home dad.

We could never grow tired of watching Peter Parker (Tobey Maguire) awkwardly struggle to navigate his newfound powers in Spider-Man. But as much as we adore part one, the sequel totally outdid it by increasing the drama tenfold and making the storyline even more intriguing. Peter begins to doubt his ability to be a hero, which results in an emotional breakdown and temporary loss of his powers. Then his world is turned upside down as tries to juggle school and work with his strained relationship with M.J. (Kirsten Dunst). Not to mention, his own role model morphs into a terrifying villain.

The first film sets a pretty solid foundation by revealing Captain America’s (Chris Evans) origin story, but it isn’t until The Winter Soldier when things really start to take off. Arguably one of the best movies in the Marvel franchise, this sequel centers more on the patriotic hero’s humanity and character development as he struggles to navigate the modern-day world, where everything isn’t as black and white. We’re also introduced to Bucky Barnes (Sebastian Stan) for the first time, and naturally, the action sequences don’t disappoint.

We could easily chalk this up to the Fairy Godmother’s (Jennifer Saunders) dazzling performance of “I Need a Hero” during the film’s climax, but we’d be remiss if we didn’t mention the clever pop culture references and colorful new characters. Sure, the original film holds a special place in our hearts, with its inventive storyline and funny one-liners, but part two manages to build on this without making the sequel feel familiar or predictable.

Not only do we get more of Wednesday Addams, but we also get interesting subplots, well-rounded new characters and, best of all, a fascinating new villain: The seemingly innocent Debbie (Joan Cusack), who becomes the family’s nanny, proves to be a devious Black Widow who’s more disturbed than all of the Addams family combined. And of course, we can’t forget that iconic Thanksgiving play scene.

Some might argue that Scream takes the cake because of that iconic opening scene with Casey (Drew Barrymore), but we’ll argue that the beginning of part two is even more chilling—complete with fitting commentary about the film itself. Often considered one of the best horror flicks ever made, Scream 2 boasts a stellar cast, smart humor and several nightmare-worthy scenes. The chemistry between on-screen lovebirds Gale Weathers (Courteney Cox) and Dewey Riley (David Arquette) is also a highlight of this sequel.

We had mixed feelings when word first got out about a fourth Toy Story film, especially since Toy Story 3 wrapped up the trilogy so well. But somehow, the film manages to tug at our heartstrings with emotional scenes that are even more heartbreaking than the end of Toy Story 3. From captivating new characters like Forky (Tony Hale) and Ducky (Keegan-Michael Key) to the budding relationship between Woody (Tom Hanks) and Bo (Annie Potts), we can’t find any fault with this sequel.

Add two comedic geniuses to one buddy cop comedy and you’ll get Bad Boys. Triple the drama, explosive action sequences and funny banter and you’ll get Bad Boys II. The chemistry between Martin Lawrence and Will Smith makes both of these films shine, but higher stakes, more suspense and the addition of Gabrielle Union’s character gives part two the edge over part one.

By far one of the best films in the series, Harry Potter and the Prisoner of Azkaban is so well done that it could actually pass for a standalone film. Not only is the cinematography better, but the storyline is also more captivating and complex than the first two films. It features time travel, tackles darker themes and centers more on character development. Plus, it’s got its fair share of genuinely terrifying moments.

The holiday season wouldn’t feel complete without at least one viewing of this timeless film. Chevy Chase shines as the determined family man who will stop at nothing to give his loved ones the best Christmas, and his comedic timing is just impeccable. But what makes this installment the standout is the fact that it’s packed with quotable one-liners and it resonates with practically any family who’s dealt with the chaos surrounding the holidays.

We know you’re skeptical, considering that part one was more successful, but hear us out here. Sister Act 2 not only includes a more diverse cast, but the musical numbers are far better, blending hip hop and R&B with Gospel in the best possible way (Lauryn Hill’s rendition of “His Eye Is on the Sparrow” still sends chills up our spine). Plus, Sister Mary is equally charming and funny as she works with students to save the school.

Don’t get us wrong, Barbershop is laugh-out-loud funny. But the follow-up takes a more serious approach by tackling a very real issue that we rarely ever see addressed on the big screen—gentrification. It still has its funny moments, but we get to know the main characters on a deeper level and see them evolve as they deal with this challenge at a Chicago barbershop.

Phenomenal acting, gorgeous special effects and a better plot all make Terminator 2 much better than its predecessor (and every other film in the franchise). From intense battles between the Terminator (Arnold Schwarzenegger) and the shapeshifting T-1000 (Robert Patrick) to the latter’s relentless pursuit of John (Edward Furlong), the entire film is a thrill.

We admit that the first movie, which follows Blade’s (Wesley Snipes) pursuit of a ruthless vampire, is compelling. But, a dhampir and skilled vampire hunter who’s forced to team up with a group of vampires to defeat an even bigger enemy? That already sounds way more fascinating. Snipes’s performance doesn’t disappoint and naturally, the sequel packs more thrilling action and dark twists.

Hunger Games kicked things off with a solid first film introducing everyone’s favorite YA hero, Katniss (Jennifer Lawrence), as she made her way through the games. But Catching Fire turns up the heat with higher stakes and quite a few significant turning points. Set just months after the events of the first film, we see the beginnings of a huge revolution against the Capitol’s oppressive system, and in the process, we get a deeper look at the main characters.

RELATED: 16 Movies That Are Better Than the Books They’re Based On