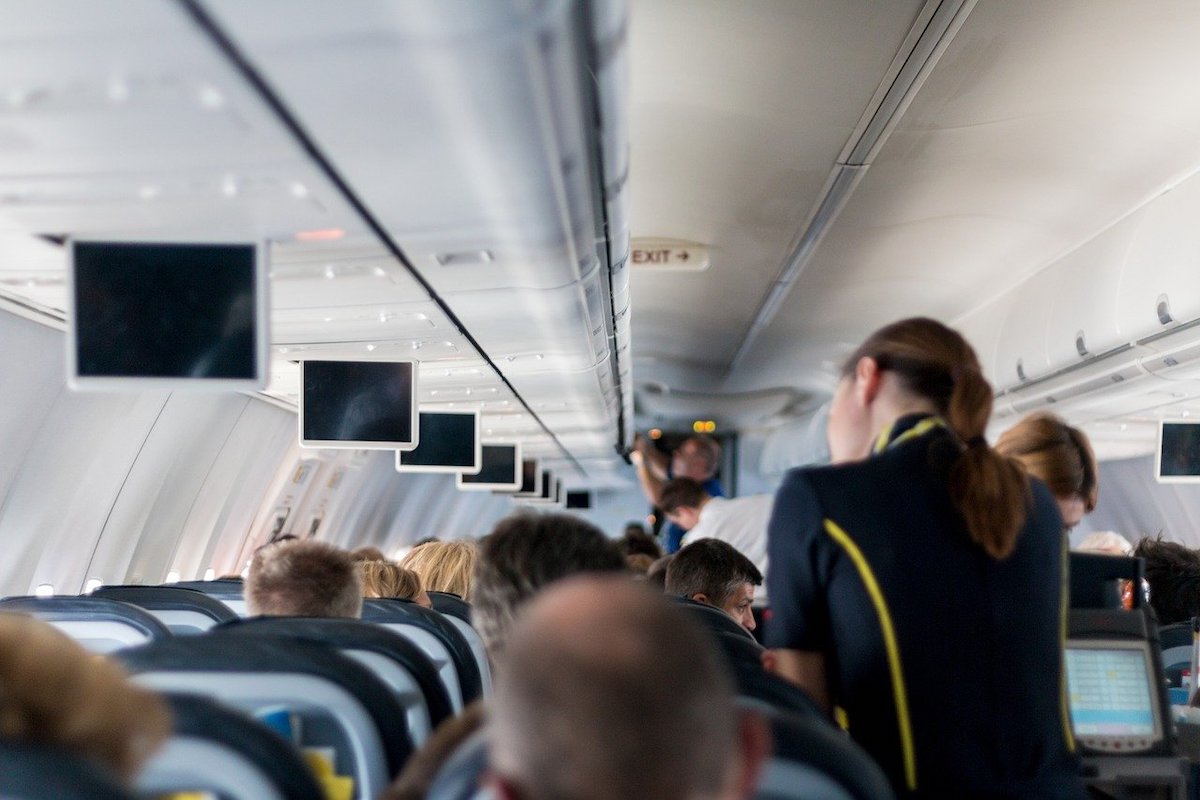 Team Out of Town Blog Hub (Outoftownblog.com) – Air travel is both a dream and a nightmare at the same time. You hope for the best when you board a plane in the hopes that everything will go smoothly and relaxing. However, if you are unlucky to be sitting with the various types of obnoxious, selfish people, then time will run painfully slow for you to feel like you’re being tormented. Welcome to air travel’s torturous hilarity and downright despair.  Secure your seatbelts as here are 15 of the worst travelers you’ll ever encounter. It’s going to be a bumpy ride!

The Racer: One who stands up when the plane JUST landed.

It’s annoying how passengers stand up as soon as the plane lands. It’s not yet safe to stand up while the plane is taxiing towards its designated parking area. Typically, upon landing, most passengers race to the exit in order to be the first out, as if the plane would leave with the passengers on it. It’s not MRT, people!

Well, attempt not to laugh when the pilot steering the airplane into the jetway parking place smacks the brakes a touch too hard and they tumble down the aisles along with their bags.

No Headphone Listener: One who plays music and watches movies without their headset on (and will say, “I paid for the tickets.”)

Seriously, who in their right mind believes it’s reasonable to watch a movie on their gadgets when they’ve forgotten to bring headphones? Why not simply switch the phone to silent mode? Is that a difficult task? Additionally, the plane is not the right place to listen to a song at a loud volume. Paying for the ticket does not give anyone the license to act however they please regardless of the disturbance. How about we brush up on our etiquette?

The Heavy Head: Strangers who rest their head on your shoulder while sleeping.

It must be a nightmare to spend the next hour trying to keep someone from falling over on your shoulder. There are undoubtedly many people who are uncomfortable being drooled on or carrying a planet-sized head on their shoulders. It’s never romantic to sleep and wake up to someone’s head lying on your shoulder, it only happens in movies! In reality, it causes you shoulder pain and stiff neck while the other person sleeps in comfort. Are you brave enough to poke their heads?

The Chatty Passenger: One who never stops talking about random irrelevant things.

IRRELEVANT TALKS! Some people are all for chatting a bit and meeting new people, but just because of respect. The chatty passenger should know the limits of knowing when to stop talking and hinting that the other party is no longer interested.

We didn’t pay for the tickets for the unlimited chats irrelevant to our lives, do we?

The Workaholic: One who brings work on a flight.

How infuriating could it be to wake up to the sound of a tapping keyboard and a clicking mouse? These are the passengers who open their laptops and work for the entire duration of the flight. It’s a little annoying, especially when you’re completely exhausted and in desperate need of rest. They can work however they like when they finally reach their destination, NOT DURING THE FLIGHT. Someone’s trying to sleep and the sound of a keyboard is never a lullaby!

Overly Demanding Passenger: One who wants to be the top priority.

People normally feel terrible for Flight Attendants when they see them dealing with overly demanding passengers. These are the passengers who continue to request assistance even when other passengers are in greater need. They find assistance even in the most unreasonable kind of things. They should keep it in mind that they are not the only passengers on the plane.

The Smelly Passenger: One who’ll flare up your nostrils with a hint of onion and garbage.

As a general rule, everyone should shower shortly before takeoff. If showering isn’t an option, people should pack a change of clothes and deodorant in their carry-on. Additionally, feet can stink, and you people don’t want the flight to be forced to make an emergency landing just because of smelly feet. Other than feet, people can strongly smell due to excessive perfume, alcohol, or sweat.

Everyone on a plane should smell neutral, otherwise, it will only disturb people who wanted to have a smooth ride. People don’t want to smell something that could actually make them throw up. Air travel should be fun, it should allow us to breathe!

The Storyteller: One who shares how traveled he or she is.

Oftentimes, we want to hear stories from strangers because their experiences with places are insanely fascinating. Additionally, we can learn a lot of travel tips from them. However, some people can actually be so arrogant about it and feel so entitled that your own experiences pale in comparison to theirs. It gets pretty annoying, too, when they overshare and you want to do something else like get some sleep, watch a movie, or write a journal. Nevertheless, you must know what to say when you wish to divert your attention away from listening to how traveled he or she is. Otherwise, it’s gonna be a really ugly ride!

The Sitting Trash: One who refuses to keep his or her own junk.

It’s so simple to put your trash in the seat pocket directly in front of you, but other passengers can’t seem to do it. Plastic wrappers, tissue paper, and even food scraps end up on the ground. Messy people will not pick them up or let the FAs to have their trashes be thrown away. For Pete’s sake, FAs are not slaves!

The Photographer: One who takes too many selfies.

There’s nothing wrong with taking selfies, as long as you don’t bother the people who are around you. Passengers can sometimes be unintentional photobombers in someone else’s picture. They keep taking pictures: before the plane takes off, during the flight, and after the plane lands. Because we’re sitting next to them, we get to be in the picture, too. We didn’t want to pay attention to how we looked, but because so many people take selfies all the time, we get pissed.

The Wasted Passenger: One who’s drunk during the flight.

There’s never an advantage to people who are drunk on the flight. You’re sitting next to someone with bad breath and the smell of alcohol is unbelievably nauseating. It’s never ideal to be next to someone who is slamming drinks like they are in an inland bar, ordering another drink while their first is being delivered. Thirsty? Can someone really drink like there’s no tomorrow?

The Non Listeners: Passengers who don’t listen to FA Instructions

You know you’re dealing with a troublemaker when you see someone deliberately disobeying safety instructions or reclining their seat during takeoff despite the flight attendant’s warning. Uncooperative passengers are a major source of frustration for flight attendants and you as a fellow passenger. Each time the FA gently reprimands someone, everyone’s attention is immediately drawn to them. Unfortunately, bullheaded passengers are difficult to ignore!

The Loud Ducks: These are your noisy seatmates.

Certain individuals are so extremely excited that they lose sight of the fact that they are not alone on the plane. We understand that traveling with a group of friends or family members can be a lot of fun. However, are they required to be so irritating on the plane? There are elderly passengers who really need to rest, businessmen and businesswomen who need to focus, passengers who will be unable to concentrate on their movie, and even babies whose naps no one wants to disturb. Although we can always ask the Flight Attendants to request that this boisterous group of people tone down their voices, there are times when we feel like the bad guys simply by requesting it, when in reality, we are the actual victims. It’s not about being “killjoy”, it’s about the fact that we have our own business to mind and these noisy individuals should be reminded not to be the center of “distraction”.

The Infant: A crying baby.

Nothing’s more irritating when you finally fall asleep and one minute after that, there’s a screaming baby! In terms of infants, we adore them. Indeed, we do. Except when they’re screaming hysterically on the plane. It gets even more irritating when the parents don’t do anything essential to calm their babies down. Geez. Bye-bye, slumber! However, if you brought earplugs, you’re in luck!

The Loud Snorer: One whose snore echoes in your dreams.

If we’re forced to sleep on a long-haul flight next to loud snorers, our precious sleep is certain to be disrupted. When we get off the plane, we were incredibly pissed because we kept waking up at random times during our red-eye flight, while the loud snorers slept soundly. You are truly the unluckiest person ever to be seated next to a loud snorer; they simply cannot control their snoring. Yes, it’s vexing, and it’s likely to keep us awake. We don’t want to get off the plane grumpy, particularly if we’re meeting family or friends. Just be sure to bring your earplugs with you to protect yourself from the worst-case scenario!