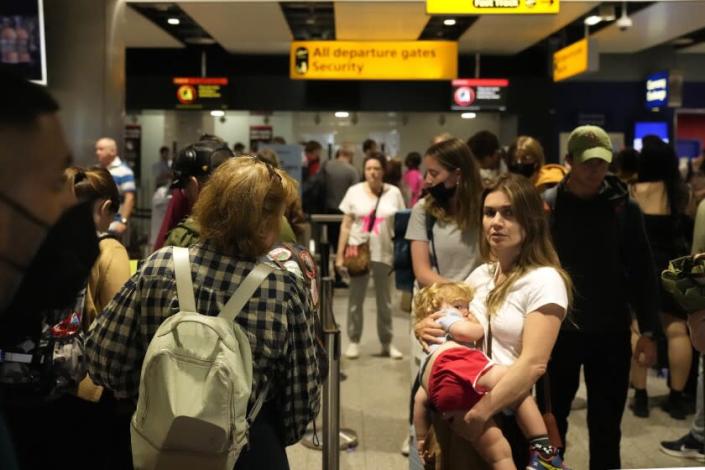 I’ve traveled a lot in my life, and I thought I’d seen it all until this summer. Despite some logistical difficulties and restrictions during the pandemic over the past two years, it was still possible to have a smooth trip in the United States and internationally. Last summer there were very few Americans abroad, particularly in Europe.

This year, it’s a different game. Some 63% of Americans are planning to travel this summer, and the industry is experiencing a wave of “revenge travel” — the desire to travel more frequently and indulgently. According to TripAdvisor, the average spending per trip in 2022 is beyond that of 2019 (up 29% for Americans), as travelers look to “level up their travel experience.”

Take it from a guy who travels and gives advice about travel for a living — everything you thought you knew about travel has changed. I recently spent considerable time in Europe, and it’s as wonderful as ever, once you get there. To get there, you can’t set out naively, or even with previous travel knowledge — it will cost you. But there are ways to survive travel — or at least, reduce the pain — even while the airline industry is reeling from staffing shortages, COVID swings up and down, and the weather gets more unpredictable.

Here are some tips for flying this summer:

Track your bags. When possible, take only carry-on luggage. If you have to check a bag, always attach a digital tracker to your luggage. These tracking devices allow you to monitor exactly where your bag is, even when an airline loses it. It can show workers where the baggage is if it’s misplaced by the airline and help them get it back to you more quickly. Nearly half a million bags were mishandled in January and February 2022. That’s roughly 7 bags out of every 1,000 handled.

Fly nonstop. Or book flights with very long layovers. The more connections you have, the more you’re asking for trouble. I suggest at least a two-hour layover domestically and a four-hour layover internationally to avoid a missed connection. There are many horror stories of missed cruises and weddings because people did not plan enough time and missed a connecting flight. Assume things will go wrong and that you’ll be at the mercy of the airport agents on the day of travel. Try to reduce those odds.

Make sure you know your rights as a traveler. Airlines in the U.S. don’t really owe you anything. But if you’re traveling in Europe, make sure you know about EU261, a regulation that allows passengers to be compensated for delays and cancellations, and how to file claims. Also, file claims with your credit card companies. A lot of credit cards offer travel interruption and cancellation coverage. This can save you when things go wrong.

Book directly with airlines, hotels and rental car companies. Overselling is a common problem and the first reservations to go are ones through online travel agencies, especially for hotels and rental cars. Similarly, drivers are in such high demand that they’ll cancel a ride if they get a more lucrative booking. I booked a Paris hotel room for this summer through an online travel agency and it was canceled.

Get to the airport hours early. It’s never too early. Use apps like FlightAware. There are a ton of staffing problems in addition to a huge increase in demand for flights. Demand for travel rebounded faster than the airlines expected, and the pandemic-induced shortages of pilots, flight attendants and Transportation Security Administration staff haven’t been resolved.

We have seen the worst travel disruptions in the bigger and more popular airports. For example, Amsterdam’s Schiphol Airport and London’s Heathrow Airport have been notorious with huge crowds and cancelled flights. And in the U.S., more than 15,000 domestic flights were canceled or delayed over the long weekend of June 18-20, because of air traffic control problems, bad weather and staffing shortages, according to FlightAware. U.S. airports having the worst problems include Hartsfield-Jackson Atlanta International Airport, John F. Kennedy International Airport and LaGuardia Airport.

Avoid bigger airports this summer. If traveling through Europe, try connecting through Edinburgh and other smaller cities to avoid the crowds. If traveling in the U.S., use the same approach. Consider flying to Fort Lauderdale or Palm Beach instead of Miami or to Oakland or Sacramento instead of San Francisco.

Travel is expected to continue to boom through the end of the year. But the same problems facing fliers now are unlikely to end by the fall and the holiday season. The problems could continue well into 2023. Demand is not going down, so don’t expect higher fares — the result of fewer planes in the sky and fewer available seats — to dissuade travelers in the following months.

Some say it’s not the destination that matters, but the journey. That’s probably particularly true this summer.

Brian Kelly is the founder of The Points Guy, a leading website on travel, airline loyalty programs and credit cards.