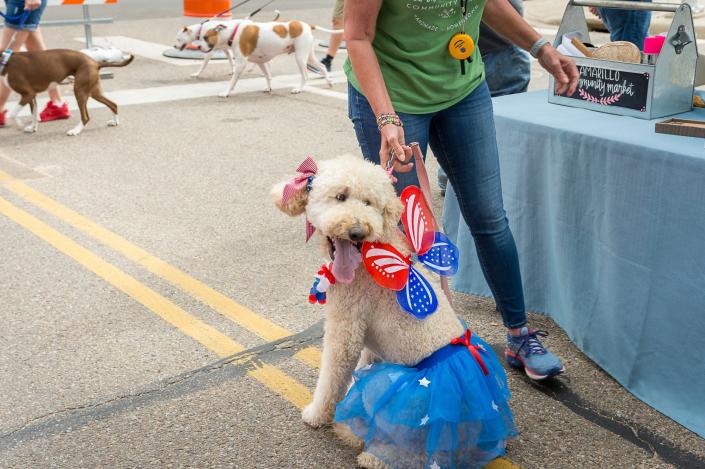 A lot of this year’s firework shows have been postponed or canceled due to current drought conditions and for the safety of individuals, but there’s still plenty to do to celebrate Independence Day in the area over the holiday weekend. Here’s a rundown of some of the area events.

Kicking off the weekend’s festivities, the Amarillo Community Market will sponsor the Patriotic Pet Parade, held on the grounds of the historic Bivins Mansion, located at 1000 S. Polk St. on Saturday.

More: Cities, counties send messages to keep Fourth of July safe and fun for all

Center City Executive Director Beth Duke said in a news release: “Amarillo Community Market is in its seventh season. We are so happy to be back in our original location at 1000 S. Polk St. For this holiday weekend, we wanted to have something special because so many people bring their pets to market.”

Guest judges for the Pet Parade are Potter County Judge Nancy Tanner and photographer Ralph Duke. Prizes will be given to the winners in categories including Most Patriotic, Most Talented, Waggiest Tail, Best Smile, Owner/Pet Look-A-Like, Best Bark and Best Puppy Eyes.

Admission, entry and parking to the event is free. Amarillo Community Market vendors will open at 8:30 a.m. The market’s closing bell will be at 12:30 p.m.

According to its website, Hodgetown will host fireworks after each of its Sod Poodle games during this holiday weekend’s series. The Sod Poodles are scheduled to play against the North West Arkansas Naturals.

Country singer and songwriter Jon Wolfe will kick off Four of July festivities in Amarillo with a Friday concert at the Starlight Ranch Event Center. Gates open at 8 p.m. for the family-friendly show, with the performance starting at 8:30 p.m. Those younger than 18 must be accompanied by a parent or guardian. Food and alcohol will be available for purchase, and folding chairs are welcome. Outside food or beverages, coolers and pets are not permitted.

If you’re in the mood to get out of town, the Canyon Chamber of Commerce will host its annual “4th of July Independence Day Celebration” Sunday through Monday, July 3 and 4.

This celebration is one of the largest Fourth of July celebrations in the state of Texas.

Kicking off the two-day event, Casey Donahew will host a concert in the West Texas A&M First United Bank Parking Lot. Gates to the event open at 6 p.m. Tickets are available for $15 in advance and $20 at the gate.  Tickets can be purchased online at https://www.prekindle.com/event/65134-kickin-it-in-canyon-with-casey-donahew-canyon?fbclid=IwAR0NccRTcozncFm1MJvgSagRdQtPHb7QKLHHna1p-1YCtSGclCbnCjWcvGY

The following morning, from 7 a.m. to 10 a.m. Monday, the Lions Club will host its Pancake Breakfast at the Cole Community Center in Canyon. The breakfast is available for $5 and includes pancakes, sausage, coffee and juice.

Once you’ve had your fill of food, attendees are encouraged to walk it off at the 4th of July Fair on the Downtown Canyon Square. The event will include more than 100 vendors, as well as food trucks and activities for the kids. The square will be open from 9 a.m. to 3 p.m., and admission is free.

If a stroll in the square isn’t your speed, join the 4th Avenue Firecracker Mile, to be held at 9:30 a.m. Monday. The run will begin at the Hampton Inn and go one mile down 4th Avenue, ending at the Downtown Canyon Square. Participants are encouraged to dress in their Independence Day best and lead the parade. For more information or to register, go online to https://business.canyonchamber.org/events/details/4th-avenue-firecracker-mile-8573

Beginning at 10 a.m., immediately following the mile run send off, is the Canyon Independence Day Parade. This years theme is “Salute to Freedom!” The parade will begin at the east end of 4th Avenue at the First United Bank Center parking lot and then travel West past the downtown square.

Due to current drought conditions, the city of Canyon has decided to postpone its firework celebration for the safety of the community.

The city of Borger will host its first ever “Freedom on Main” celebration, Saturday, July 2 from 6 to 10 p.m. The event will include a patriotic kids bike parade across from the Morely Theatre, followed by live music, food, shopping and kid-friendly activities located downtown at Borger’s 1st Outdoor Beer Garden. Festivities include bounce houses, food trucks, cornhole tournament and music by Henry Hunt & the Habit, Towers, and RAK45. The event is free and open to the public.

The Borger Main Street Project is a nonprofit organization made up of local organizations and leaders, and focuses on connection, collaboration, and revitalization in the downtown Borger area by organizing successful partnerships, promoting authenticity and arts, and by investing in economic vitality.

The City of Cactus will host its 7th annual 4th of July Celebration, beginning at 11 a.m. Sunday, July 3, with a parade traveling down main street followed by festivities located at the Cactus park, including food trucks and vendors, volleyball and cornhole tournaments, followed by fireworks at dusk.

The City of Cactus also announced that it will hold a Fourth of July Celebration on July 7 in partnership with the Dumas/Moore County Chamber of Commerce that will include a parade at noon and fireworks after dark.

In Panhandle, they will celebrate Independence day with their Fourth of July Charity Car Show from 7 a.m. to 2 p.m. Monday located on Main Street. The show will include antique cars trucks, tractors, and motorcycles. admission is $25 per person, all proceeds will benefit the Children’s Miracle Network. Live music and karaoke will be provided by Double D Entertainment. $5 raffle tickets will be available for purchase. A parade is also scheduled to start at 10 a.m. that day, with activities and vendors near the courthouse.

The Pampa Chamber of Commerce and the City of Pampa will host a day full of Fourth of July celebrations including a Firecracker 5k beginning at 8 a.m. Monday at the Freedom Museum, followed by the parade beginning at 10 a.m. at the M.K. Brown Memorial Auditorium and then heading from the Civic Center to Cuyler Street from 11 a.m. to 11 p.m. At the Recreation Park, attendees can eat from local food trucks, listen to live music, and join the hot dog eating contest or cornhole tournament. The Pampa Firework Show is scheduled to begin at 9:30 p.m.

As a reminder from the city of Amarillo : “In the city limits of Amarillo, it is illegal to shoot fireworks in public right-of-ways and ditches. No public areas are permitted for fireworks use. Fireworks are also illegal in public areas of Potter and Randall counties. Fireworks are legal on private property in Potter and Randall counties with permission of the property owner.”

This article originally appeared on Amarillo Globe-News: Here is your Fourth of July guide to events in Texas Panhandle